What is an underlying theme, I ask myself. This is part of the key to how I will stand out. 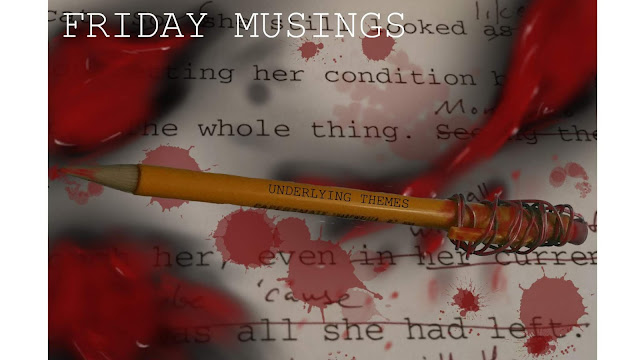 Is it called theme, or is there another name for it? It's sort of like a story that plays out throughout an arc of the overall body of an artists work. You know who that artist is when you see this.

Sometimes it's planned, sometimes you can run with it.

Examples:
The metal band Korn is a good example where it's laid out almost in plain sight--well, if you relate to them, I guess.

They use stories and mental visuals of sexual exploitation on the bands lead singer, Jonathan Davis, as a theme that comes up many times over just about all of their albums. This is a true thing that happened to him, though some say it's not exactly as he says. But something definitely did happen. He took that and used it to draw upon creatively. There are other examples with this particular band, but that is the most prominent.

It's sort of like when you hear the saying, use your experience--good or bad. Write what you know, but broader, CREATE what you know. But this is something that surfaces when you least expect it.

Emenem is another musician example where he draws upon how he grew up and things he dealt with as he did. He has recurring situations and characters that he conjures throughout his songs. Certain drugs, people he's encountered, bullies, pop culture (sort of like Stephen King). I read King praising him a while back, don't remember the article--can probably be Googled.

But the point is, there is something that grows as these artists come out of the woodwork among peers of similar tactics and writing techniques and form their own image of themselves. A style develops and something else.

This is part of the whole branding thing.

Here, look at this: Dean Koontz uses, or at least used to use, a lot of dogs (preferably golden retrievers), guns and characters that know how to use these weapons well, and such. These things are in most of his stories in one way or another. I haven't read too many recent novels as of this writing, but I'm sure these things are in there, as well.

King uses pop culture, so if you have a morning breakfast scene, you'll relate with the different cereals the kids eat, or the TV playing some cartoon or children's show that you remember. Or a favorite brand of some product will play a role in how the monster gets into the character's heads.

It's their thing. And you and I have our own things. We just have to find them.

Maybe they're already there; you just have to know how to fine them.

I can't find its technical name, but I know there's a name. Though sometimes it doesn't really matter, as long as you know what it is in your heart.

Do you know the technical name to what I'm talking about?

Let me know in the comments section below, or on Twitter @ WCMarchese

Hope to see you there.