Showing posts from November, 2019
Show all

Take Time For You

It's been a busy few months. I've been working my rear off, trying to get some writing in. Surprisingly, I've been able to do more than usual. Still not what I want.  But you have to do what you can.  This Thanksgiving, I was given the opportunity to take off Black Friday. Now, being I do a lot of the cooking, having off the next day was a relief. I could rest. And actually enjoy the cooking I did the day before.  But then I realized. I hadn't taken a Black Friday, or any day close to the holidays, off since I started at my place about 14 years ago.  It felt good. Real good.  Sometimes you have to take time and relax. You have to look around and see where you've gotten to in life. Plan things going forward, or just remember the old times. Otherwise, you're just slamming forward and never seeing anything around you.  It's easy to do this when you are working to support yourself (and your family) and working on the side to seek your dreams.  Sa
Post a Comment
Read more

Gary, Kris and I talk about our holiday nightmares in this hilarious episode.  WCM
Post a Comment
Read more

Live the Holidays For Now

You have to live for now. Things will never be just right. Things will never be perfect. If you keep thinking that you will pass by great opportunities and memories, you will never see those that are right in front of your face.  Holidays will go by with you saying next year will be better, but that may not be how it turns out. If you keep putting off life, you will never live it.  I grew up around family and friends who said, more or less, things will be different next year. But what if, God forbid, next year doesn't come? What if you're still in the same situation financially, or health-wise--or any other problem, for that matter? What if you miss out one last holiday without someone who doesn't make it to next year?  It's easy to say that, to pass things off until a later date, but when you look back right after the holidays are over, you're usually let down.  You know what you wanted it to be like, but it wasn't, because you had the vision in y
Post a Comment
Read more

It was so good yesterday I think I'll do it a second time around. For my lunch break I went to one of my favorite cafes again. It's been so busy at work. Going to see what I can get done today. This is a video from yesterday, but the picture is from today. Unfortunately this is one of the dilemmas when you work a day job. Especially a busy one. WCM
Post a Comment
Read more

Oh man. It's been a while since I've been to my Cafe. You know, the one where I get the leaf that sits atop the caffeine needed to write! Or at least to stay awake after the onslaught that is my day job.  It's cold out today and usually I love it, but it was in the 50s this morning and now I'm the 30s and going into single digits tonight, real-feel. So the heat and coffee feels good right now.  But let me get to some work before my lunch is over.  Talk soon. WCM
Post a Comment
Read more 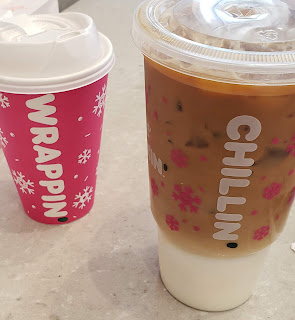 Dunkin' Donuts eggnog latte is okay. It could also be the location where I purchased it, so I have to try another before I make my decision. But Starbucks eggnog latte is still the best I've tasted.  Whole Foods has it, but I was told at the location where I go to that it might not happen this year. Though, again, could just be the worker was misinformed, or didn't want to bother. And theirs is okay, as well, but has proven to be a hit or miss.  Dunkin's is sweet, and Whole Foods could have a taste of being burnt slightly, probably due to the barista steaming the eggnog/milk too much.  Starbucks is just right, most of the time--because you could experience an off-day barista there, as well.  I tended to move away from Starbucks, also, because of price and politics. Though I will say, they have not engaged in it too much as of late.  It seems trivial, but just having the festive feeling during the holidays, no mater what you celebrate, is something that makes t
Post a Comment
Read more
More posts