June 14, 2017
Our next author expose in Monsters Exist is Sarah Budd whose story The Murder of Crows puts, where a London taxi driver Barry must pay for his sins at the hands of Morrigan, but you'll never guess what will transpire. And now Sarah will explain the story behind this noir rollercoaster and Morrigan, the character that served as inspiration for her tale.


Morrigan
The Murder of Crows by S.J.Budd
Morrigan is an ancient Celtic goddess from the immortal Tuatha De Danann clan associated with Irish mythology. She was believed to be the goddess of war and guardian of the dead.
One of her many responsibilities was to transport people on their journey from life to death into the otherworld where she dwelt. She possessed shapeshifting abilities and could appear in the form of a crow or raven, an animal she is very strongly associated with.
Despite being a harbinger of death, Morrigan has never been seen as an evil figure and in mu story I have her fulfil a role of where she takes people into the otherworld because they are a danger to others. Some people saw her as a protector and she was believed to protect certain people in battle.
Although a frightening deity she was doing a service to the mortal folk looking over the land and protecting decent people from those who mean to do harm. But to the wrong sorts of people she would have been seen a monster.
In my story, The Murder of Crows, Morrigan has returned to the land of living to help three slain women seek revenge against their killer, Barry. However Morrigan is not a vindictive woman and uses her otherworldly powers to see something is amiss and quickly realises that Barry has unwittingly married a succubus who is leaching out all his goodness. She has a plan to put things right but it will come at a high cost.
My story questions what exactly is a monster? Is it just a matter of perspective? Some monsters might be seen as heroes to others. 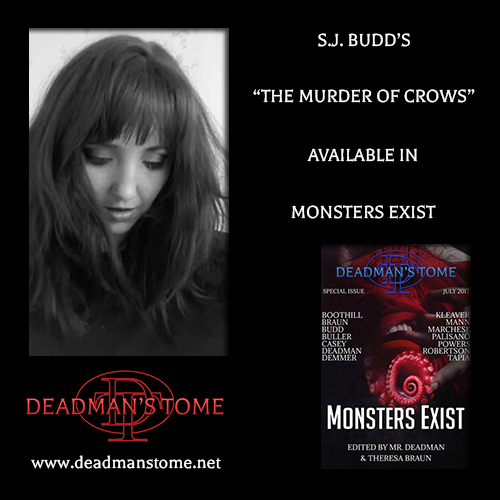