June 18, 2017
In walks Manuel R Tapia with a story about the Chupacabra, or as his character call them, Chupas. Through the eyes of a boy in the middle of two revolutionary fronts against the Mexican government, the legend of this cryptid is displayed through carnage and gore, and an ending you may not expect. Here is the story behind Bloodstream Revolution.

My father would sit near the elders in the Mexican village where he grew up. He would explain these things to me as a child. He'd say he learned a lot about life from listening to them. He learned a lot about superstitions, as well. In every superstition lies a hint of truth, he'd say. Needless to say, I took his advice about keeping my ears open when elders spoke.

My entire family tree is from Mexico. My siblings and I are the first generation Americans. I remember both my grandmothers speaking of old Mexico, including their troubles and superstitions. As always, one of the popular legends was La Llorona. I nearly wrote about her since I grew up near a river myself, her story always told between the older siblings of my friends in hopes to scare us younger brats. But I chose not to tell her story she has come just this side of being clichéd.

The Chupacabra was another story I heard much of from my family’s elders. The Goat Sucker. Many villages and many small countries claimed to have awakened to goats that had been sucked dry of blood. A non-glittery, real life vampire legend.

After choosing the Chupacabra, I had to find a setting for the story. The USA never dealt with the Chupacabra and I felt Mexico was just as much a home to me as the States.
As a child, my grandmothers would tell tales of the Mexican revolution and all it's woes. They'd tell of revolutionaries and federalistas alike taking advantage of the villages whom both were supposedly defending. I found the irony in this mind blowing. Both sides would take advantage of the villages’ food supply and, sadly, the women.

‘Bloodstream Revolution’ is a revolution within a revolution. Set amidst the Mexican revolution of the early 1900s, our narrator is a young boy who’s had his family stripped from him by means of the revolution: father killed and mother taken. As the village was to scared to intervene, he holds a grudge deep within against the ruthlessness cowardice of mankind. When a battle between the revolutionaries and federalistas overtakes his village, he is witness to a second revolution nobody expected, one against mankind. He is forced to side with one beast or another. 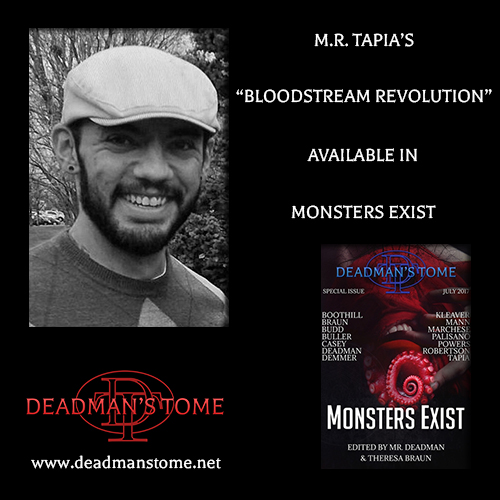