June 15, 2017
Our next author showcase in the Monsters Exist anthology is Leo Robertson. In Kelpies, we find Fraser taking a break from a jog on the beach, where he makes acquaintance with an attractive woman. But what she's got to offer is something not so easily refused. Here is the back story of Kelpies.

I try to run as often as I can, but will use bad weather/legs/attitude to get out of it whenever possible. There’s a beach near where I live in Oslo that I like to run to, though I resent the happiness of beachgoers, their enthusiasm for aerobic exercise, how they dumbly toss Frisbees to one another and laugh like “Dur dur dur!” Don’t they know we’re all going to die?!
The imagery never fails to make me think the relative permanence of nature compared to humans and the brevity of life. Stones weathered by geological ages, more grains of sand than people, waves pulled by a multi-billion-year-old moon. (I don’t get invited to a lot of BBQs.) The beach is the perfect place for an existential crisis, in stark contrast to its usual use: mindless, carefree activities, which only serve to enhance it. Worse, I’m not even the first person to have thought this—I’ve discovered this same sentiment in the literature of dead guys: how’s that for insignificant?
Anyway, I thought of two characters who could represent opposing viewpoints: one, a man who takes care of himself by exercising and joyously plans for a future that he’s filled with meaning; the other, an inert woman, who’s given into life’s inherent pointlessness. We embody both attitudes multiple times in our lives, I think, but she’s the seductive one. Allowing her thoughts to take over is as peaceful as drowning. All you need to do is stop running, stop planning, give in. I put her at Firkin Point, a place I’d gone in childhood to enjoy carefree barbecues with my family.
That was half of the story, but I was nowhere near the minimum word count, so I needed a second act.
I thought with a little more research I could have a kelpie victim’s ghost advising the sculptor who designed the “Kelpies” sculptures in Falkirk. My dad bought some early sketches of these sculptures and gave one to each of his three kids, and he had some books on it, so it seemed perfect, but for whatever reason, it wouldn’t take. Instead, I focused on one of the aspects I’d already developed, one of my favourite topics for some reason, and one equally grounded in existential despair: cheating.
Early readers have told me the ending of my story was a surprise—it sure was to me as well! I just kept typing how I thought the characters would interact until the second half of the story came to a natural conclusion, and cut out all the waffle. This is more or less how Ray Bradbury tells you how to write stories, and why not take his advice? He seems to have had the most fun writing—but it’s a scary idea that you should trust your understanding of your characters enough that if you simply allow them to interact long enough, a story will emerge—even for as few pages as “Kelpies” lasts. In my experience, I have about a 50%+ success rate at this, but if I do this rather than plot everything out beforehand, and it works, it for sure produces the best writing.
I hope you enjoy “Kelpies.” I don’t believe its outcome would happen to everyone—unless they’re in a horror story, of course. 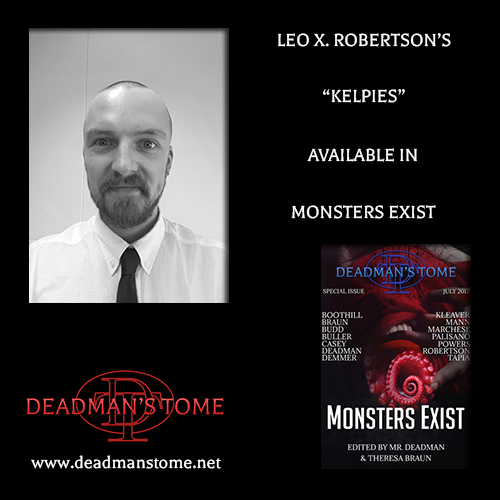