July 07, 2017
We're almost there. The next author in the Monsters Exist anthology is John Palisano, with his story Criatura, where breaking down in the desert can have some pretty grave consequences.

When you make your way up past Los Angeles and head north into the desert communities, you see just how precarious things are in the city. Built on top of desert, the city seems to stop a few miles right before the San Joaquin mountains. There’s a gorgeous moment on the 5 freeway where the mountains come up around you and then you dip down into the sandy valley. The world just opens up.

There are desert communities, but they are vastly different than those in the city. Smaller and even more spread out, most have all the stores and luxuries of modern living. You’re never too far from filling up or grabbing lunch, or even from having a cell signal.

But the crazy part is just a bit off the highway, and you can be unseen. Hidden. The landscape stretches out far and wide, and as much as there are wide open plains filled with dry river beds, there are also huge sandstone hills and rocky mountains covered in chaparral and desert grass. These are places where I imagine undiscovered things can live and lurk, just waiting on the poor sap who breaks down at just the wrong spot.
And it’s in that imaginative scenario that the visceral story ‘Criatura’ first took root. I sure hope whoever encounters the story enjoys it. 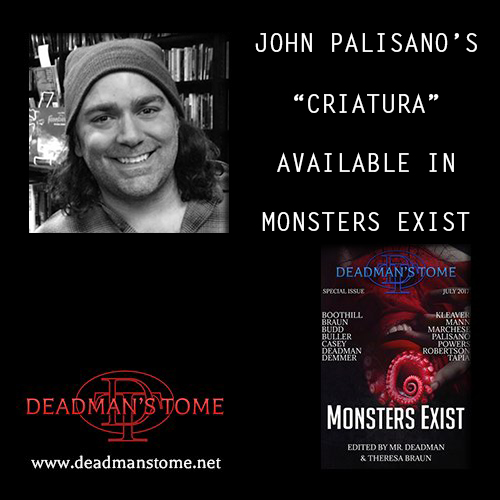 Author John Palisano has a pair of books with Samhain Publishing, DUST OF THE DEAD, and GHOST HEART. NERVES is available through Bad Moon. STARLIGHT DRIVE: FOUR HALLOWEEN TALES was released in time for Halloween, and his first short fiction collection ALL THAT WITHERS is available from Cycatrix press, celebrating over a decade of short story highlights. NIGHT OF 1,000 BEASTS is coming soon.