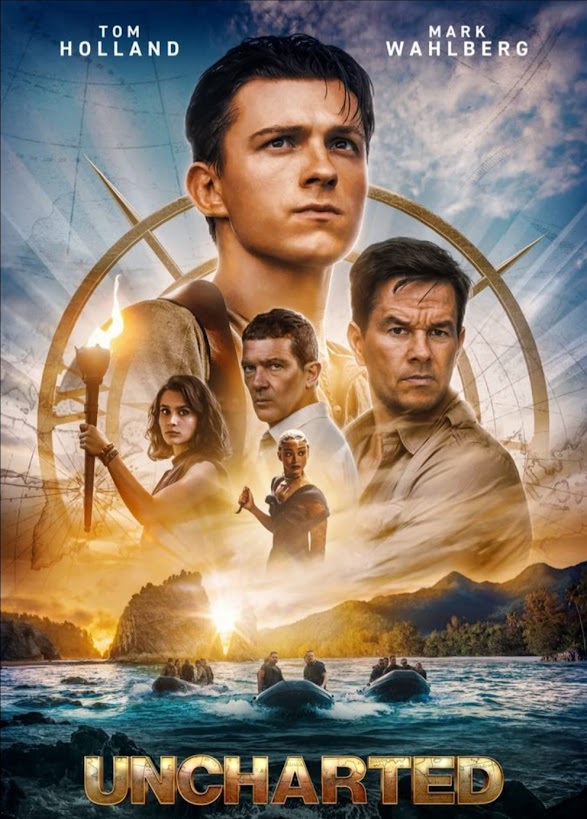 I wanted to go into this movie with the expectations of it sucking. This was far from the case.

I felt worried maybe it would be one of those Hollywood goof-ups that get things totally wrong when porting a game or novel over to the silver screen. But the writers for the Uncharted adaptation did a pretty darn good job. Everything from a cameo of the voice actor for Nathan Drake in the game (Nolan North), to the theme music popping up here and there (though you have to wait until the cameo and then end credits). Still. It brought that feeling when it happened. You know, that feeling. There were memorable scenes--like the airplane cargo hold scene--which really stood out. Moments where Nate jumps, or looks back, encapsulated a moment when the vision was locked in time with the game. And I have to say, Donny Walberg as Sully wasn't too bad. I like that he kept calling Nathan Kid, like in the game.

The movie is mostly a frame story, as they've done in the game Uncharted 2 Among Theives (as who enjoyed the games can remember). You see Nathan in the thick of an action scene and then everything cuts back to how he got there. Leading up to that point and then going forward.

The way I looked at this movie was a younger Nate Drake. It could be another installment in the series. It sort of fits in nicely. They had Sam; they had Chloe (if this is young Drake, Elena comes later); they had Sully's moustache at the end. And if you think Nathan's character, played by Tom Holland, was too young looking, to me it fits in to the timeline as a younger Drake.

I wanted to hate this movie. Especially the way things have been message after message with movies lately, crammed down our throats. Political views forced upon the masses. But this was done rather well. And if there were any hidden programing snuck in, I didn't notice it.

Even though Tom Holland wasn't my first pick to play Nathan Drake, I must say there were moments where his face looked almost like the game. Even poses and certain scenes, thanks to the clothing he wore. Personally I see Nathan Fillion playing the role. But he would probably be better for a Nathan in an older timeline. Like maybe between Uncharted 3 and 4.

The baseball jersey was in here. The long-sleeve Henley t-shirt was in here. And so was the ring necklace (but if that was missing...I mean, come on).

They even left room for a sequel. With Sam.

The movie was a great adaptation. Was it perfect? No. But it had a lot of the mood and scenes from the game, enough to make it feel like a part of that universe. I'd say watch this movie, if for nothing else than nostalgia of a great game with a great story. I felt like a kid wanting to go on an adventure afterwards. You know that feeling. Just as the story from the game made me feel. It's not often a movie does this to me. This one did.